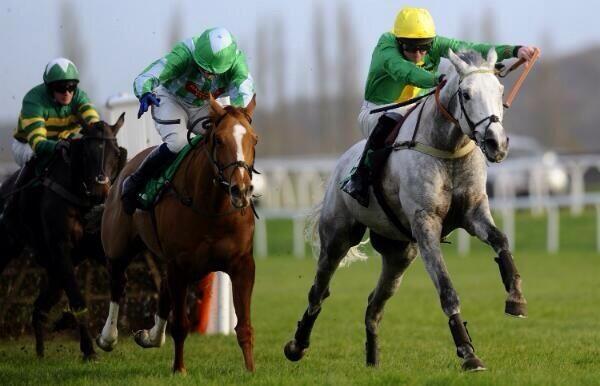 Vendor did us all so incredibly proud yesterday by WINNING on his seasonal reappearance at Newbury on Hennessy Day. The beautiful grey had a torrid time last season with niggling injuries preventing him from running to his true form. Alan King, his team at Barbary Castle and the Vets at Bristol University Hospital have done a wonderful job at restoring Vendor right back to his best and its a testament to their patience that he won in the manner that he did.

Although he had been working well at home, the bet365 Handicap Hurdle looked to be a very competitive race with past Champion Hurdle winner, Punjabi on show as well as the well fancied mare, Mischievous Millie. Vendor’s jockey, Jack Doyle, let him settle in behind for the majority of the race and he popped over the hurdles fluently and confidently. He quietly tracked the rest of the pack before steadily creeping past horses to really throw down a challenge in the straight. Taking the final hurdle in the lead he quickened up to win by two and half lengths from Shotavodka in second. Doyle was very complimentary about our horse after the race saying that he was always travelling well and seemed a very happy horse. Its an absolute delight to see Vendor come back to the form that he proved he was capable of when first arriving in England in 2011. His 3rd in the Fred Winter Hurdle at the Cheltenham Festival in 2012 proved he was a smart horse and with his injuries now (touch wood) ironed out, we look forward to an exciting season ahead with him. Re-watch his win in the video box on the news home page.