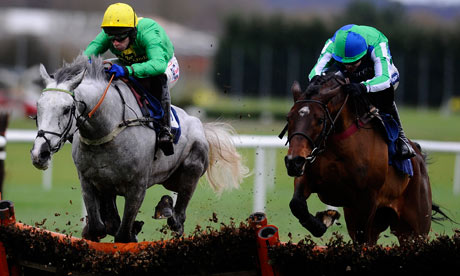 Vendor will take his chances in the Betfair Hurdle (previously the Tote Gold Trophy) at Newbury this Saturday. The Alan King trained grey will take the step up after winning a magnificent race at the track back in November where he proved that he is over his niggling injuries from last year (touch wood!). He will be partnered by the jockey that steered him to victory that day, Jack Doyle however Vendor has subsequently risen in the weights by 8lbs.

The competitive race is currently headed in the market by Paul Nicholls’ Irish Saint who has been well fancied since Nicholls’ decided to leave the hotly tipped Irving out of the race. Vendor is currently a 12/1 shot for the race which is expected to be run on very soft to heavy going. We hope that he will act on the ground like he did when he was in France.