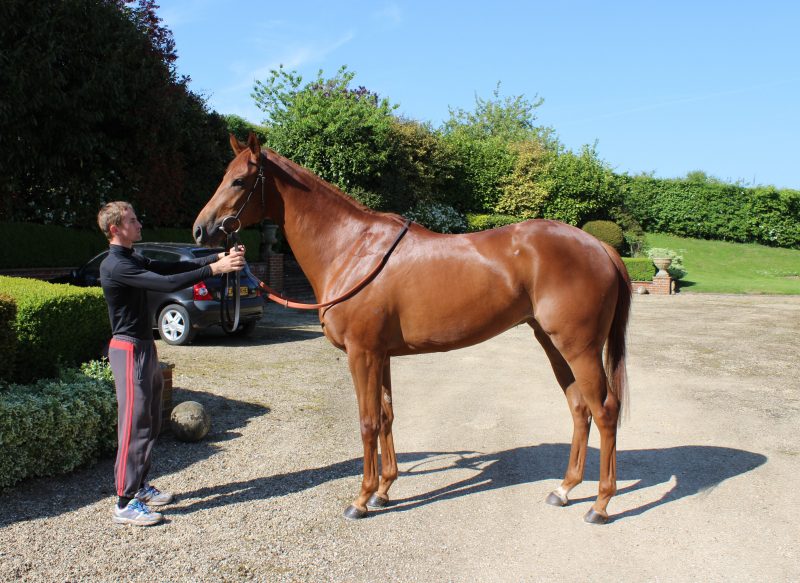 We have just bought a smashing filly by the brilliant stallion Nathaniel at the Arqana Breeze-Up sales in Deauville.  Nathaniel was champion racehorse in Europe in 2011 and 2012 as a three and four-year-old, having won the Group One Eclipse and King George V & Queen Elizabeth Stakes.  He started life as a two-year-old finishing second to the mighty Frankel in a maiden race at Newmarket so he was quite entitled to be a very good racehorse and sire.  While we were in the ring for this filly, Perfect Clarity, who is by Nathaniel, scooted home in the Oaks Trial at Lingfield.  She is now a strong contender for the Oaks at Epsom where she bids to emulate Enable’s great victory last year.  Enable who went on to become champion three-year-old filly last year is Nathaniel’s best daughter, so we are thrilled to have purchased a filly by this fantastic sire.  What really attracted us to this lovely filly was her eye-catching breeze.  She did the breeze in the eighth fastest time out of 170 lots. This was exceptional for a filly with a middle distance pedigree.   The consignor was Katie Walsh and she told us after the sale how much she liked the filly. We have bought a number of good Thurloe horses over the years from these Arqana Breeze-Up sales including Waterway Run who won the Group Three

Oh So Sharp Stakes at Newmarket and finished a close-up sixth in the Breeders Cup.

The filly has gone to Hughie Morrison, who was particularly impressed with her breeze.  He said “she is a strong, well-balanced and athletic filly with a good intelligent outlook. I think she is a very exciting prospect”.  Hughie is going to give the filly a little time to relax after the sales and hopes to have her ready to run later in the summer.   Hopefully she will go on to compete in all the top stakes races as a three-year-old.