FAROUT is a four-year-old son of Dark Angel who joined Willie Mullins for Thurloe Ireland after he was purchased for €65,000 at the Arqana Deauville Autumn Sale in November 2020. As a two and three year old Farout was trained by Francis Graffard in Chantilly and during that time he won a Handicap at Vichy over 1m 2f. He has a strong female family with his dam a half sister to the dam of top class National Hunt sire Maxios.

The Thurloe Ireland team have been delighted to see the progress FAROUT has made in relatively short time since joining the Willie Mullins team. His jumping improved enormously from his first run to his second and it was very taking to see him win so stylishly in May under Danny Mullins. His jumping was slick and he showed a lot of gears to win by 15lengths. We were thrilled that his next target would be the Guinness Novice Hurdle at the Galway Festival, our first runner at this historic meeting. FAROUT was in command again and despite his winning penalty he was able to get the better of his stable mate, Tax For Max, with the minimum of fuss.

🚀💥🌟A really exciting result from FAROUT who goes clear to win on his 2nd start for us at Cork this afternoon!

He was a purchase from @InfoArqana out of @GraffardRacing yard.

FAROUT attempted to make it three straight victories in a row at Listowel in September but a very poor round of jumping scuppered all of his chances and he was a well beaten second at short odds. Willie Mullins has retained all his faith in the horse and he showed us what he was made of with a really pleasing fourth in the Grade 1 Royal Bond in November. He travelled very smoothly and jumped a lot better under Sean O’Keeffe. He is only four and is learning on the job from race to race.

FAROUT most recent run came in his second go in Grade 1 company in the Future Champions Novice Hurdle. This was another small field but FAROUT settled well, jumped nicely and travelled into the race full of running. Coming around the bend he looked sure to play a big part and he stayed on very strongly to finish a very pleasing 3rd. He is really learning to race, jump and play a big part in good races. A big well done must go to Youna Samson who rides FAROUT every day and does a brilliant job looking after him. He looks to have a nice future ahead of him for team Thurloe Ireland. 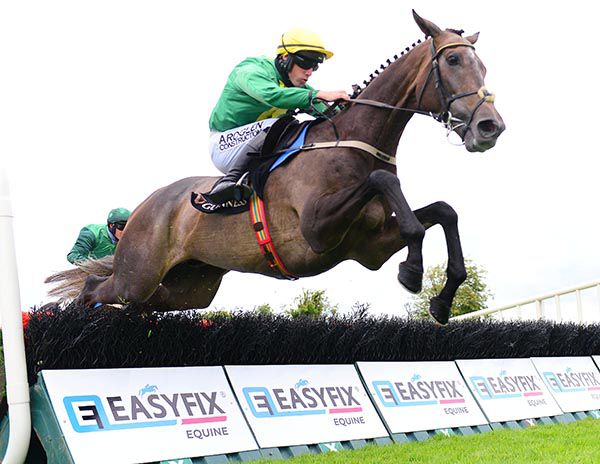