BUZZ has been on the most remarkable journey since we purchased him from Hughie Morrison in the autumn of 2019. The striking grey was five when he arrived at Nicky Henderson’s and to introduce him to the idea of jumping, he went to the brilliant Henrietta Knight to get his eye in where he loose schooled over poles at her wonderful set up near Lambourn. This was a big benefit to BUZZ as was the fact he was partnered up with Reggie Pallas, who has been instrumental in his life at Seven Barrows. BUZZ had his first run over hurdles in January 2019 at Taunton where was sent off the the very short priced favourite. However, it wasn’t all that straightforward as he was very lit up when Nico got on him in the paddock and Buzz fell over. Despite this, he would go onto win and make a bright start to his career. His ‘buzzy’ nature has been a characteristic that has made him a bit different to other horses but it has been managed well in order to get the best out of him. On his second run at Doncaster, he was saddled in the boxes before the pre parade ring and went down to the start early which was a big benefit and he came home strongly to beat the favourite Glory and Fortune.

BUZZ came out of his second win in great form and we aimed to back these victories up with a go in graded company in the Dovecote Novice Hurdle at Kempton at the end of February. BUZZ ran flat that day, most likely as a result of three quick runs in succession so we put a line through this and looked towards the Scottish Champion Hurdle in April. However, not so long after this, the world was succumb to the COVID-19 Pandemic and racing stopped which put all plans to one side for BUZZ. He went on an enforced Summer break a lot earlier than had been planned but one that did him the world of good. Despite being a bit of a ‘loner’ in the field, he strengthed up enormously and returned to Seven Barrows at the end of August 2020 with plenty to look forward to.

With a workable handicap mark of 136, he began his second season hurdling in the Welsh Champion Hurdle which proved a worthy journey as he finished a very game third and he arguably would have got closer if it wasn’t for a bit of a mess of the last jump. The handicapper was fairly lenient on him with just a 1lb rise in the handicap following this run so he went off to Ascot next, a track that would quickly turn into one of his favourites. He made a mockery of his handicap mark in this second run of the season, putting an easy 7 lengths between himself and the second horse. The handicapper didn’t miss this win and he went up a huge 11lbs to a mark of 148 which meant that he was going to be pretty much top weight for all the biggest handicap hurdles in the country.

To infinity… and beyond!

Buzz rocketed lightyears ahead over the final two hurdles at #Ascot, making him your @Coral Performance of the Day! ⚡️ pic.twitter.com/lGyuR55RKP

He lined up next for the Betfair Exchange Trophy, a prestigious Grade 3 worth £100,000. Off top weight he put up a huge performance, finishing off very strongly on deep heavy ground to finish 2nd to his former stablemate, Not So Sleepy. Learning what we did from the season before in terms of running him in quick succession, we decided to give Buzz a decent enough break so he was freshened up for the prestigious Betfair Hurdle which took place at the end of February. As he had gone up a further 4lbs in the handicap for his efforts in the Betfair Exchange Trophy, he was certain to be top weight again so we enlisted the services of top conditional Kevin Brogan to take a very helpful 5lbs off his back. This was a help but ultimately there were plenty of well handicapped novice hurdlers in the line up that held a good advantage at the weights and BUZZ finished a valiant 5th.

Not So Sleepy holds on to win the Betfair Exchange Trophy!

This was a turning point for us in terms of where best to place BUZZ next. He had run two huge races off top weight in Handicaps and the feeling was that he deserved to take his place in a race off level weights which ultimately meant a Graded race with much stiffer competition. With no suitable races at the Cheltenham Festival, he was aimed for Aintree and the Grade 1 Aintree Hurdle over an extended trip of 2m 4f, his first go beyond 2m. With James Bowen in the saddle, BUZZ was relaxed, jumped well and put in the biggest run of his career to finish 2nd at 22/1 to Abacadabras. It was eye-catching how well BUZZ stayed on from the final hurdle to the line, despite the loose horse getting in his way on several occasions. This was a really pleasing end to his second season over hurdles, proving he could compete at the highest level and over a trip that could possibly extend even further than 2 and a half miles. The future looked bright for BUZZ as he headed off for a second Summer holiday at Hillwood Stud.

From the Welsh Champion Hurdle, a rating of 136 to 153 he’s gone from one big handicap off top weight to the next & now this! ⭐️

No doubt thriving and pleased with himself for having such a good season, BUZZ had a really good Summer holiday and although invariably fairly grumpy which is part of his charm, always wanting to nip someone with his ears flat back, he did really well over the Summer and even made some friends! It was while he was enjoying his time in the field that we plotted up an idea to bring him back to the racecourse but for a go on the flat in one of the country’s biggest staying races, the Cesarewitch Handicap at Newmarket. Although it took a bit of persuading and arm twisting as it wasn’t something that Nicky Henderson had in mind for BUZZ, the plan was agreed and we brought our grey back into training to get him prepared for a tilt at this race in early October 2021. We would give him a racecourse gallop in the lead up but other than that it was a fairly intense training regime by Nicky and Reggie to get him spot on for this £250,000 race.

The biggest pull was BUZZ favourable racing weight for this handicap – his mark on the flat was still at 96 which was the last rating he had before he switched over to the flat. Some believe that your flat rating should equate to +40 over the jumps so 96 flat = 136 hurdles but BUZZ was now on a hurdles mark of 155 so the thought was that he was 19lbs well in. However, the question was whether he could translate his good hurdle form back on the flat, against race fit horses and a tribe of Willie Mullins’ runners. The Champion Irish trainer had won the last three runnings of the race and was throwing six horses into the mix this year.

The ground was drying out in the lead up to the Cesarewitch and BUZZ was also given a not so ideal draw of 6 but he had the services of the Champion jockey, Oisin Murphy. What unravelled was a fantastic performance from our likeable grey after 184 days off the track. He travelled sweetly at the back of the large pack, with Murphy allowing him to bowl along in his own rhythm. As the race began to develop he crept past horses and came to mount a serious challenge, matching strides with the Willie Mullins trained mare Burning Victory. But BUZZ dug deep and outstayed the mare in brilliant fashion and won the race going away. It was a marvellous performance and a day the syndicate shall never forget.

This super win was a fantastic training performance by Nicky Henderson and Reggie Pallas and it set up his new season very well back over hurdles. He came out of the win full of beans and the plan next was to go back to Ascot, to start him off over 2m 4f for the Grade 2 Coral Ascot Hurdle.

BUZZ was a short price to get his third season over hurdles off to the perfect start and the performance couldn’t have been better. He jumped slickly and travelled extremely well, looming up before the final hurdle and taking full command of the race under Nico de Boinville. BUZZ pulled away to win the race by 3 1/4 lengths. It was another extremely pleasing performance, with Nico certain that he would happily be comfortable over further so the plan was to step up to 3m with all roads hoping to lead back from the Stayers’ Hurdle at Cheltenham. The bookmakers took a confident view in his potential and he was cut to second favourite for the race in March.

What a horse! Buzz bolts up in the Grade 2 @Coral Hurdle at @Ascot for @NdeBoinville and @sevenbarrows! pic.twitter.com/prC1AjbhS1

BUZZ first test over 3m was set to be the Grade 1 Long Walk Hurdle at Ascot in December which he was installed as the evens money favourite. The big question was whether he could stay or not but BUZZ seemed as well as ever so the excitement was building.

BUZZ was building a big following, as a horse who could transfer his form from flat to jumps as well as a tough attitude which he showed in his races. At this stage, BUZZ had raised £50,000 from his winning prize money for the Royal Marsden Cancer Charity. A truly exceptional feat.

Sadly, on the morning before BUZZ was due to take his place in the Long Walk Hurdle he sustained a pelvis injury whilst doing routine exercise. It was a bitter and cruel blow so close to such a major race as well as for a horse who was really thriving. BUZZ is currently ruled out of the season with a pelvis fracture to the right illium wing. He is on box rest and unable to move much at all but quite brilliantly he is taking to the injury as best as he can. He is being a good patient whilst cross-tied to the back of his box, munching on hay and carrots. His prognosis for racing again is optimistic and all things going well, we hope he will be able to race again next season. BUZZ is 8 years old and is in the best care with the Seven Barrows team. He will go off to Hillwood Stud where he goes every summer for his recuperation and we continue to keep our fingers crossed that he can make a full recovery to pick up where he left off. 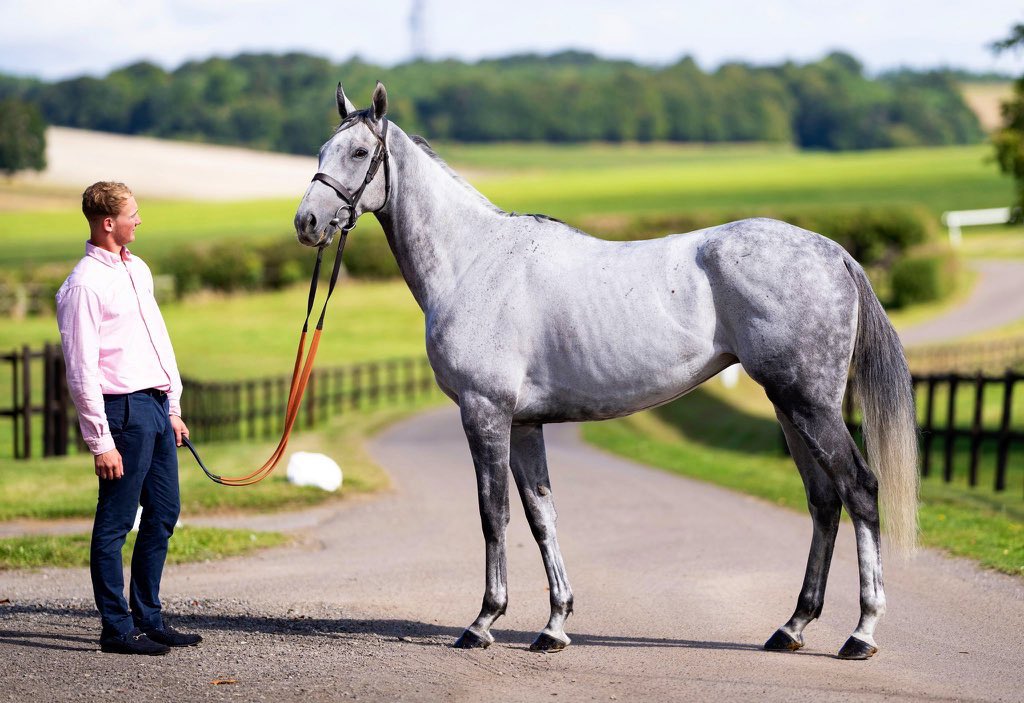